Difference between revisions of "Have a Nice Death Wiki"

WHAT IS HAVE A NICE DEATH? 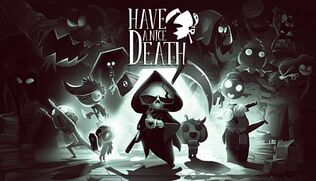 Have a Nice Death is a 2D action roguelike which was developed by Magic Design Studios, who also created Unruly Heroes, and was then published by Gearbox Publishing. It was announced at The Game Awards in 2021 and was released for PC via Steam and Steam Deck in March 8, 2022 in Early Access. Out now!

It is a hand-drawn 2D Action Rogue-Lite where you play as Death, Founder and CEO of Death Incorporated—a sprawling corporate empire that processes souls for the afterlife—who currently finds himself teetering on the edge of burnout. His top executives, the Sorrows, have been running rampant on Earth’s surface, blatantly ignoring company protocols, leaving him buried in an underworld-sized mountain of paperwork. Now, in order to regain control of his company and soul-ply chain, as well as secure a much-needed vacation, he will need to traverse the various departments of Death Incorporated and remind his unruly subordinates who’s boss.

Retrieved from "https://haveanicedeath.wiki.gg/wiki/Have_a_Nice_Death_Wiki?oldid=1940"
Category:
Cookies help us deliver our services. By using our services, you agree to our use of cookies.